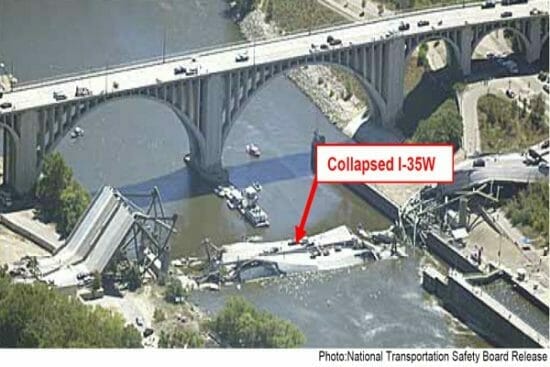 On August 1, 2007, just after 6:00 pm, the I-35W bridge over the Mississippi River in Minneapolis suddenly collapsed. Thirteen people perished, and another 145 were injured, many seriously. The main river crossing structure consisted of two parallel steel deck trusses supporting the transverse truss girders, which in turn supported the reinforced concrete deck slab. The connections of the truss members were double gusset plates mostly riveted in the shop to the members. A few connections had field bolts for field erection. The steel trusses were “fracture critical,” which means fracture of one member or its gusset plate connection would result in the collapse of the entire span. The post-collapse investigations established the cause of collapse to be the failure of the two gusset plates in a single truss connection designated as Node U10. The reason for the two gusset plates in this connection to fail was that in the original design, the thickness of the gusset plates in this Node 10, was specified to be ½-inch, whereas, after the collapse, calculations clearly showed that it should have been 1-inch. So the engineering and scientific reason for the collapse was a design error in the original design. However, the main question in the aftermath of the tragic collapse was: why such a major design error did not manifest itself in some kind of local distress during the almost 40 years that the bridge was under service?  The answer is that in the aftermath of the collapse, it was clear that, in fact, at least four years before the collapse, the engineering firm that was hired by MN DOT to do the inspection of the bridge had taken photos of the members and gusset plates and in their report gusset plates in Node 10 are seriously buckled and deformed, but the report states the condition of the gusset plate is “Good.” One might say that this is “incompetence” and not “unethical” behavior.  But, Dr. Astaneh, by using publicly available factual information, will show that, even with such a major design flaw, if the inspecting firm that did the inspection of the bridge four years before the collapse, had followed the first canon of the Code of Ethics for Engineers which states: “Engineers, in the fulfillment of their professional duties, shall: Hold paramount the safety, health, and welfare of the public,” the tragic collapse would have been prevented.