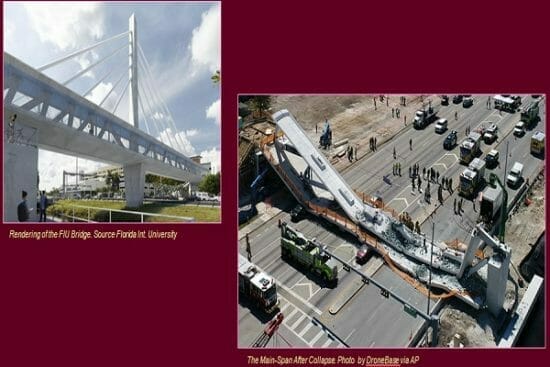 This Engineering Ethics course on the tragic collapse of the FIU Pedestrian Bridge. In the first part of this Ethics course, we discuss the engineering aspects of design, construction, and the damage in the form of cracks in the post-tensioned concrete truss of the main span before it collapsed on March 15, 2018. Dr. Astaneh then presents the design errors made by FIGG Bridge Engineers that violated the provisions of the AASHTO LRFD Bridge Design Specifications. The collapsed main-span truss used an Accelerated Bridge Construction plan never before done. Dr. Astaneh will show how the designers had failed to check the adequacy of main-span truss during all stages of a complex Accelerated Bridge Construction (ABC). Added to very serious design errors, and lack of adequate stress analysis during various phases of the construction, was the inadequate peer-review done by Luis Berger.

The second part of the course focuses on engineering ethics, with emphasis on the Fundamental Canon 1 of the “Code of Ethics for Engineers” which states: Engineers shall hold paramount the safety, health, and welfare of the public. With so many design errors and the lack of adequate peer review, the collapse of the main span was inevitable. But, could the loss of six lives and injury to 10 others be avoided? The answer is yes if only the engineers involved, had followed the Fundamental Cannon 1 and considered public safety above other considerations.  Dr. Astaneh will take the attendants through the events from mid-February, when the first cracks were observed, until March 15, when the tragic collapse occurred and show how almost everyone involved ignored the clear signs of structure failing without thinking of safety of public who were driving under the collapsed bridge or the workers working on it.

Professor Astaneh has spent more than 2,000 hours studying and investigating the collapse of the FIU Bridge; first as the lead member of an expert team in a judiciary proceedings and since then doing the investigation of the case to bring lessons learned from this tragedy, especially the ethical issues, to the bridge engineering community to help all of us engineers to keep public safety, health and welfare paramount in all of our engineering activities. Dr. Astaneh has more than 52 years of experience in design, construction, research, teaching and failure analysis of steel, composite, concrete and timber building and bridge structures. He is a licensed P. E. in California, the recipient of the 1998 AISC T. R. Higgins Lectureship Award, and is a UC Berkeley College of Engineering 2013 Minner Faculty Fellow on Engineering Ethics and Professional/Social Responsibility.

Upon completion of the course, the student should understand